The In Vitro Fertilization (IVF) comprises a host of techniques that convey the treatment of the gametes and the formation of the embryos in the laboratory. Our technology has allowed us to mimic in the laboratory the natural conditions that take in a women’s uterus and in this way obtain extraordinarily satisfactory results. According to the way in which the egg and the spermatozoid get into contact we can distinguish two different procedures: 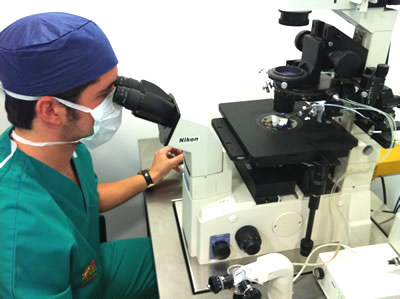 In the conventional IVF the spermatozoids are adjusted to an adequate concentration to be incubated together with the eggs. Fertilization occurs unassisted by the action of the spermatozoid itself. It was the first IVF technique to be used and it is proposed when a large number of eggs are available.

The IVF with Intracytoplasmic Sperm Injection (ICSI) consists of the injection of a sole spermatozoid into the egg. Each spermatozoid is selected based on visual criteria that allow identifying a good mobility and morphology. The ICSI eliminates all barriers between the egg and the spermatozoid and that is why it is the technique with the highest success rate. It is especially indicated where there is small number of eggs and in cases in which more complex techniques such as PGD are developed.

What are the steps of an IVF / ICSI treatment?

1. The couple will have to be examined in detail. The doctor will evaluate the number of necessary tests to estimate the woman’s ovary reserves, fundamentally these tests are based on scans and hormonal tests. The objective is to decide the treatment which could offer the greater opportunities to be successful in the ovarian stimulation. In the case of the male a basic semen study will be necessary.
If necessary more tests may be required to optimize the procedure.


2. The quantity of endogenous hormones produced by a woman in a natural cycle only generally allows it to be only one egg the one that reaches the final maturation state. The rest of the eggs prepared to mature will not get to be developed and will degenerate, before reaching the ovulation moment. The principle of IVF / ICSI is based on applying a hormonal treatment that induces a controlled ovarian hyper stimulation. This response requires a coordinate medical follow up which will allow obtaining a greater number of eggs in the final maturation state, thus a higher number of embryos which will increase the possibility of success.

3. Once the follicles where the eggs are found in the ovary have reached an adequate size, the gynaecologist will pharmacologically induce ovulation and will program the puncture of the follicles. It is a very simple, low risk procedure and requires surgery to maintain an adequate ambient control that facilitates the immediate pass of the eggs to the embryology laboratory. This procedure lasts approximately 10-15 minutes and is done under sedation to diminish discomfort. The extraction is done via vagina and visualising through ultrasound probe. By means of this system the gynaecologist visualises and absorbs the liquid from the follicles with adequate size which contain the eggs.

4. The eggs, once they have been recuperated by the embryologist, are prepared to be inseminated either through an IVF or ICSI procedure.

5. Those eggs in which fertilization has adequately taken place will be kept in incubation, in an ambience especially adapted to their metabolic and nutritional requirements.

Each day the embryologist evaluates the development of the embryos taking into the consideration the division pace and the morphology. The embryos are normally transferred on day 3, although in some cases it can be prolonged up to day 5 to have more selective criteria.

In these cases the embryos will be submitted to a prolonged growth program up to day 5 which corresponds with the blastocyst stage.

6. The embryo transference is the procedure in which the selected embryos are deposited in the maternal uterus. It is done be means of a catheter which is carefully introduced into the woman’s cervical channel. The transference is carried out in the operating theatre in order to maintain adequate conditions from the IVF laboratory. The number of embryos to be transferred will never be more than three and it will have to be decided in each case in an individualised way, depending on the reproductive history of each couple, and avoiding whenever possible to increase the possibility of multiple conception.

7. The spare embryos with good quality will be vitrified. This will allow the couple to be able to use them the moment they desire for new embryonic transfers.